Rad Hourani is a fashion designer, who was born in 1982 to a Jordanian father and a Syrian mother in Jordan.  After his high school graduation, he worked full time as a modelling scout and a stylist.  Eventually he moved to Paris, where he designed his first clothing collection.  Somehow, a mere two years later, he launched his namesake label for a fashion show and received notable attention.  All at the young age of 25 (he’s 29 now).

What sets Rad apart from most other designers is his conceptional direction being predominantly focused on unisex designs, with a flair for goth.  His fashions have become cult classics, often compared to established designers known for technical precision.  In 2009, he hit the ground running with some outfits incorporating tights for women… and men, exuding a bleak-urban-future aesthetic.  Rad has his own website where you can view the breadth of his designs: Rad Hourani.  Meanwhile, please enjoy a few images I’ve located and posted below.  Also, there’s a great interview with him on YouTube.

I think Rad’s designs are effectively unisex in a number of respects, and I like his use of black opaque tights.  However, I did see one design that looked a bit more on the feminine side. 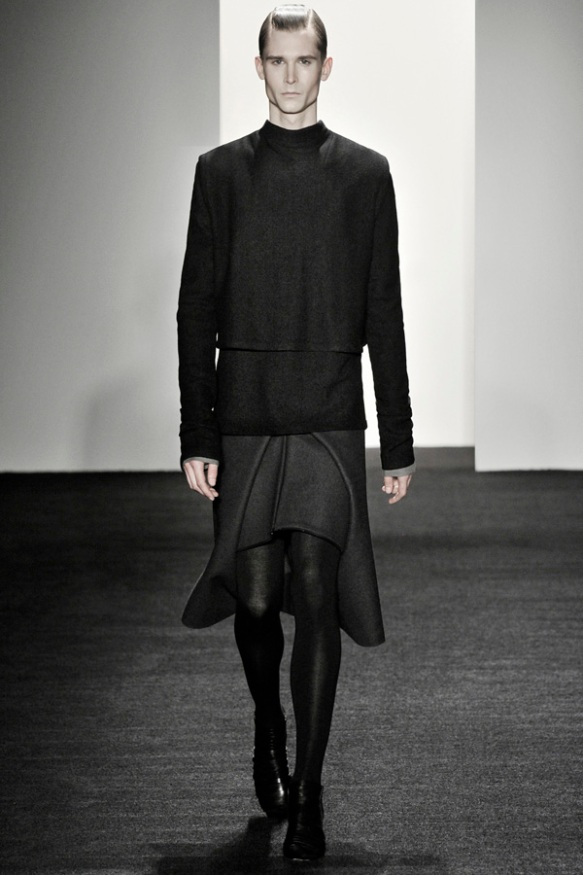 (I like this kind of urban Bohemian look, lower Manhattan casual wear)

I could see this styling continuing off the runway and into the streets, but I wouldn’t mind occasionally sprucing it up with just a little suggestion of color, like dark burgundy or deep navy colored tights to draw some leg attention.